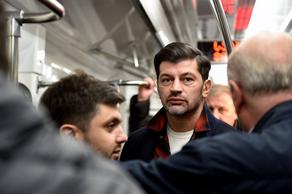 Kakha Kaladze, the Mayor of Tbilisi, spoke about the rehabilitation works of the metro stations planned and partially implemented by the City Hall.

According to him, at the end of the year, new subway carriages will operate for public use.

"I want to talk about an important topic. It is our transport policy and one of its components, such as the rehabilitation of the subway.

We have started updating the carriages. We are working on the rehabilitation of metro stations, where no significant works have been carried out for about 50 years," Kaladze stated.