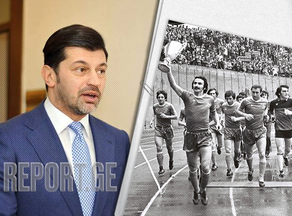 Forty years have passed since the victory of Tbilisi "Dinamo" in the 1981 European Cup Winners' Final.

On May 13, the Mayor of Tbilisi Kakha Kaladze congratulated "Dinamo" and Georgian fans at the government session of the capital.

According to Kakha Kaladze, the victory achieved on May 13, 1981, was a great success for Georgia.

"I once again want to congratulate" Dinamo, "Georgian fans, all those who rejoiced on May 13, 1981. I want to thank them very much. They are my friends, and I am proud of Tbilisi "Dinamo," said Kakha Kaladze.