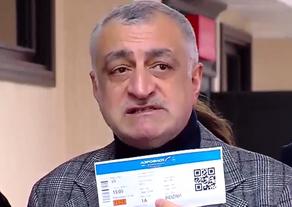 A substantive hearing of Mamuka Khazaradze and Badri Japaridze case, founders of TBC Bank, is being held at Tbilisi City Court. Khazaradze bought a Tbilisi-Moscow flight ticket, which he said was for Bidzina Ivanishvili.

“We have heard Bidzina Ivanishvili's interview where he said that he would fund 35 euro tickets from Kutaisi airport for people who need jobs and will help them to work in foreign countries. He will do this with our budget, our taxes. I decided to buy Bidzina Ivanishvili a ticket. This is the ticket for Tbilisi-Moscow flight. I want to tell him that this is not a 35 euro ticket, it is a business class ticket, because he is used to living a good life. With this ticket he can leave the country and after that Georgia will start the path of normal development", Khazaradze said.