Lisa Yasko: Mikheil Saakashvili proves this way that he is innocent 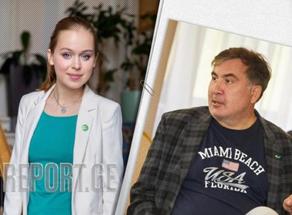 After meeting with the third president of Georgia, Mikheil Saakashvili's wife, Lisa Yasko, came out of the Rustavi prison. She told reporters that the president was not going to end the hunger strike and hoped for the support of the Georgian people.

"I'm worried about Mikheil Saakashvili's health condition. In fact, it is the 15th, 16th day by various counts that he has declared a hunger strike. It is unfortunate that his personal doctor is not allowed to see him. I think this needs to be addressed urgently.

According to her, the hunger strike is the only way for Mikheil Saakashvili to prove his innocence.

"He left a lot of work in Kyiv, a good job position, and a house.

He came here because he loves the Georgian people very much. The most important thing now is to do everything possible so that he is no longer imprisoned and no longer starves," Lisa Yasko said.