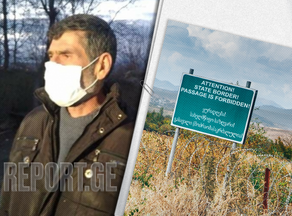 Malkhaz Doluashvili, a resident of the Zerti village, who has illegally been detained on the occupied territory in the vicinity of the Bershueti village, Gori municipality, has been freed.

Doluashvili, 60, says that the de facto regime released him after paying a fine for crossing the so-called border. He also added that he was detained after he had found himself in the occupied region while trying to catch his hunting dog.

Mr. Doluashvili was unlawfully detained on the occupied territory in the vicinity of the Bershueti village three days ago.

The State Security Service said that after the illegal detention, the hotline was activated immediately, and the EU Monitoring Mission was notified of the occurrence.

The Co-Chairs of the Geneva International Mission and Georgia's international partners were also informed of the fact, according to SSS.