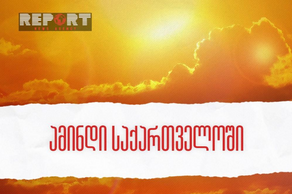 Dry and comfortably warm weather will last, forecasters say. Temperatures in Tbilisi will settle at -1 degree at night and 14 degrees during the day.

In Mestia and Bakhmaro, temperatures at night will fall to -13 and -14 degrees at night respectively and reach 10 and 11 degrees respectively throughout the day. In Tsageri, -1 degree is expected at night, and 13 degrees during the day.