Mufti of Kobuleti and Guria: Prayers will not stop in the village of Buknari 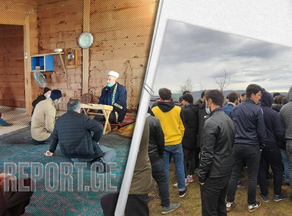 Mufti of Kobuleti and Guria Aslan Beridze arrived at the Muslim Chapel in Buknari.

"Our people are not demanding the construction of a fundamental building. When we reach an agreement, the appropriate place will probably be allocated. I must emphasize that prayer will not stop. The prayer will continue; it will not disturb anyone. Nothing bad happens here," said Aslan Beridze, Mufti of Kobuleti and Guria.

The Ministry of Internal Affairs detained one person on the fact of confrontation in Buknar.

According to Chokhatauri Mayor Irakli Kuchava, the government and law enforcers will do their best to resolve the conflict in the village of Buknari.