National flag lowered at Embassy of Georgia in Ankara 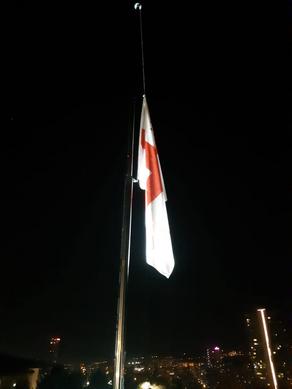 According to the Embassy of Georgia to Turkey, the national flag was lowered at the Georgian embassy building as a sign of mourning the Batumi tragedy victims.

National flags are also lowered Georgia-wide as the country is mourning its victims.

A residential building collapsed on Batumi's 26 May street at 12:00, on 8 October. Rescuers removed ten people from the rubble, with eight of them being already dead. One died after hospitalization.

One citizen is still under medical observation; his health condition is improving.

The MIA detained three in connection with the Batumi building collapse. All of them were sent to jail.