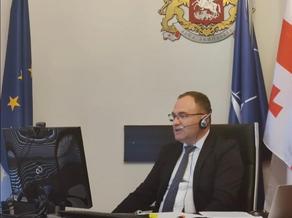 A spring session of the NATO Parliamentary Assembly is underway on May 14 – 17, organized by Sweden.

The delegation of Georgia’s Parliament headed by Irakli Beraia participates in the session.

He noted he welcomes Georgia’s political progress putting the political crisis to an end.

Member of Georgia’s delegation Giorgi Khelashvili asked him a question on elaborating practical steps on strengthening collaboration with the Black Sea countries.

In response to the question, Gerald Edward Connolly said that he supports the institutionalist integration of Georgia, Ukraine, and NATO.