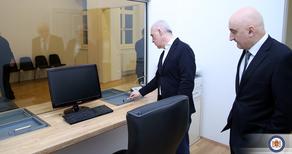 The Consulate Service Center organized according to modern standards opened in the building of the Georgian Embassy in Austria. The Minister of Foreign Affairs, Davit Zalkalian, has visited it today. The Center is equipped according to the so-called front-office requirement to serve two citizens in parallel.

As stated by the Minister, one of the main tasks of the state and the Georgian diplomatic representatives is to improve the quality of the service in the place.

“The Ministry of Foreign Affairs is transforming the consulates into the modern centers’ standards, which is implemented in all diplomatic representations stage by stage”, - said Zalkalian.