New Year gala concert at the Palace of State Ceremonies 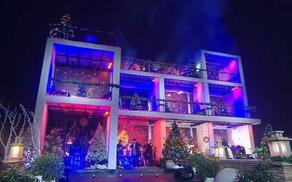 A gala concert organized by Tbilisi City Hall took place at the State Ceremonies Palace. According to the City Hall's press service, this year's gala concert was of a different format due to the current situation - the performers were standing on a specially arranged stage, which was a multi-story house with balconies and terraces. In addition to the musical numbers presented on the stage, there were also live broadcasts from different Tbilisi districts.

During the gala concert, the Mayor of the capital congratulated the population on the New Year.

"Friends, nothing can stop us from being together, moving towards the future. Congratulations! Let us leave everything bad in the past.

Let us celebrate the New Year with hope and, most importantly, with love," said Kakha Kaladze.