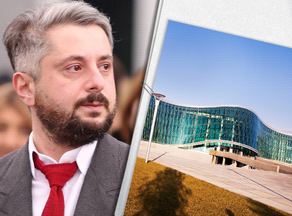 Nika Gvaramia, the General Director of the Main Channel, addresses the Ministry of Internal Affairs.

"I am publicly addressing the Ministry of Internal Affairs. Their statement made no sense. What should we do when a terrorist makes a hostage call and threatens to kill him? Do you think we should or should not live stream it when it could lead to the death of a hostage or hostages? Publicly respond and take responsibility for the worst possible consequences. We will obey the instructions of the Ministry of Internal Affairs, but we will not take responsibility," Nika Gvaramia said.

Recently, at a briefing held at the Ministry of Internal Affairs, it was announced that the media would be restricted to a direct signal reflecting the ongoing special operation in Zugdidi.

An armed person broke into the branch of the Bank of Georgia in Zugdidi and took 19 people hostage. The kidnapper demands $ 500,000, a helicopter, and the withdrawal of special forces from the perimeter. He gave law enforcement officers 2 hours to comply with the demands, after which he says he will start killing the hostages.