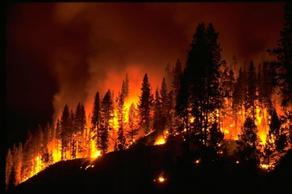 In the vicinity of the village of Ormotsi, the Ateni Gorge, the blaze's thick smoke can be detected above the burning forest.

The complex terrain and poor visibility are making fire-extinguishing works difficult to carry out.

A special working staff has been created on the spot, which is led by Deputy Interior Minister Ioseb Chelidze and Head of the Emergency Situations Service, Temur Mgebrishvili. Davit Sukhishvili, the Head of the Fire and Rescue Forces Department of the Emergency Rescue Service is also at the scene.

Around 40 firefighters and rescuers have reportedly been mobilized. The area is set to be monitored all night. In the morning, The MIA Border Police helicopter and the corresponding equipment will be involved in fire liquidation efforts. The number of firefighters is also planned to increase to 200.