Obligation to use mask in public places remains in force 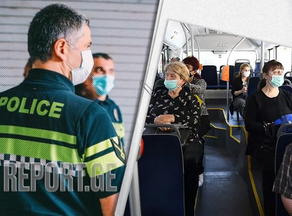 "Despite the easing of restrictions, we still need to follow the recommendations and regulations," Amiran Gamkrelidze, the head of the National Center for Disease Control, stated after the Coordination Council meeting.

According to him, the obligation to use a mask in public places remains in force.

"It is clear that the mask will not be obligatory in the open, but it is recommended. Whoever wants and thinks it appropriate should wear it. I will tell you that wearing a mask is advisable, but it will not be mandatory. The use of the mask remains in force in large gathering places, at stops, in vehicles, in the subway, and so on. And of course, in closed buildings," said Gamkrelidze.

"On the one hand, not to worsen the epidemic and on the other hand to give more freedom to the economy, because it is clear that it is the tourist season and many people come to the country," Gamkrelidze noted.