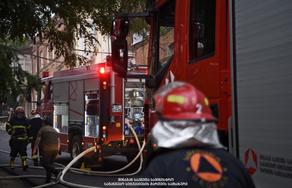 An explosion took place in the former hotel building in the village of Potskhoetseri, Tsalenjikha Municipality.

According to preliminary information, a gas installation caused the explosion.

As the Emergency Management Service told report.ge, as a result of the explosion, a fire broke out on 30 square meters of the building, and the windows got shattered.

The fire has been extinguished.

According to Tsalenjikha Mayor Beso Partsvania, employees of the Enguri HPP are temporarily living in the building.

No one was injured in the blast.