One dead and two injured - crash in Tbilisi - PHOTO 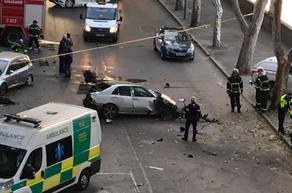 Two cars collided near the Mshrali bridge, in Tbilisi, resulting in casualties.

According to the Ministry of Internal Affairs, a passenger of a Toyota car was killed and the driver was taken to the hospital.

Honda car traveling in the opposite direction went off the way and crashed into a sidewalk, injuring the driver. According to the police one more Toyota car was damaged during the car crash.

Investigation was launched in accordance with Article 276, Part 6 of the Criminal Code of Georgia.

The crime envisages from 4 to 7 years of imprisonment with deprivation of the right to take ruling position or the right to work for the term of up to three years.