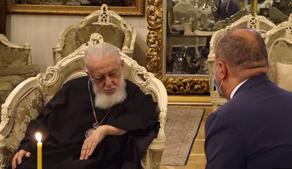 The Catholicos-Patriarch of All Georgia and the spiritual leader of the Georgian Orthodox Church, Ilia II, hosted the Director-General of SOCAR Energy Georgia, Mahir Mammedov, at the Patriarchate.

According to the Patriarchate, issues of cooperation were discussed at the meeting. Ilia II thanked SOCAR Energy Georgia for the support of the Patriarchate for five years.

Protopresbyter Giorgi Zviadadze said that the relations between the two countries and peoples were discussed at the meeting. He noted that this relationship is based on mutual respect:

"Five years ago, the State Oil Company of Azerbaijan (SOCAR), with the support of President Ilham Aliyev, launched natural gas compensation project for churches in Georgia. The program includes about 650 churches and monasteries in 35 dioceses," Zviadadze said.

At the meeting, Mammedov thanked the Georgian Patriarch for strengthening friendly and close relations between the Azerbaijani and Georgian peoples and states.

In November 2014, a memorandum of cooperation got signed between the Georgian Patriarchate and SOCAR Energy Georgia.