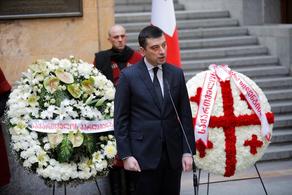 ''This war has no winner, and it is a tragedy for both Abkhazians and Georgians,'' Georgian PM Giorgi Gakharia told reporters.

Gakharia laid a wreath on the memorial of the war heroes.

''A total of 20% of Georgia remains occupied. We all should do everything to ensure the Abkhazians and Georgians to live together in an economically strong, fair, European and educated country,'' Gakharia said, adding he believes in Georgia to succeed.

Twenty-seven years have passed since the fall of Sokhumi, the central city of Georgia's Abkhazia region which remains Russia-occupied.

It was the end of an armed conflict between Georgians and Abkhazians in 1992-1993.