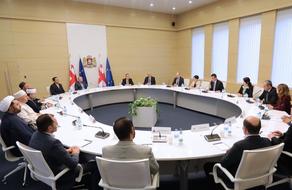 "We are honored to congratulate our Muslim citizens on Ramazan Bayram Festival. This is the day of reconciliation, love, and care. We all serve this country, and we all together belong to Georgia. We have a century-old tradition of serving this country, and, most importantly, we do respect each other's beliefs and convictions. Once again, I wish you a blessed Ramazan and wish you everyone to make a contribution, either significant or insignificant, to the development of our country," the PM said, adding that the tiny multi-ethnic country of Georgia, in which everyone can coexist peacefully, is setting an example to the entire world.

Muslim religious leaders, on their part, thanked the Georgian PM for the government's contribution to the Muslim community.

"We together are building a democratic state, in which democracy is flourishing with time. People's rights are much more safeguarded here today, and we are all thankful for this," Mufti Aadam Shantidze declared.