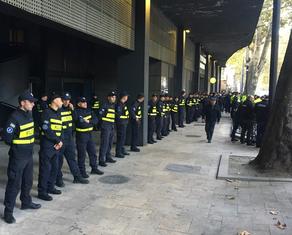 At the entrance of Amirani cinema hall the law enforcement officers are gathering. Mobilization of the police is reasoned by act of protest against the And Then We Dance first show.

The protest organizers announced the act to take place today.

According to the report.ge journalists the Dog Service personnel are examining the film demonstration hall together with dogs.

To ensure the security of the citizens and aiming at order provision the police is working in emergency regimen.

The representatives of Georgian March are gathering in Vera Park.

The first show of the film And Then We Danced took place in five Tbilisi and Batumi cinema halls on November 8 on the background of Georgian March, Levan Vasadze, Guram Palavandishvili, clergy representative and other groups’ act of the protest.

According to the information of the Ministry of Internal Affairs totally 28 persons were detained as a result of the protest. Two law-enforcers were injured during the incident and placed to the hospital.