President initiates opening a memorial to the vanished in wars

President initiates opening a memorial to the vanished in wars 23 February, 2020  15:54 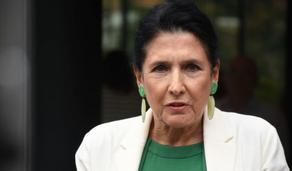 The Georgian President Salome Zurabishvili offers an initiative to open a memorial for the heroes who vanished in wars and fights. She spoke about it during the event dedicated to the hero cadets who sacrificed their lives for country independence in 1921. The President participated in the service in commemoration of the cadet heroes.

In February 1921, the cadets of the 510th brigade of the 11th Army tried to resist the Bolsheviks’ invasion of the country. Most of them were killed in the battle. On February 23, they were buried in a brothers’ grave of the military churchyard. It is the place where the Parliament of Georgia is located now.