Protest rally to be held outside Parliament 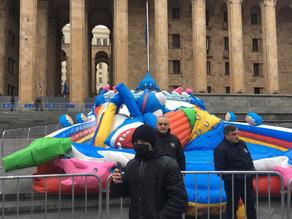 Civic activists and opposition parties will hold a protest rally outside the Parliament today.

According to Giga Makarashvili, a member of the Shame Movement, the protest will start at 12:00 today and will continue after the New Year. According to him, Malkhaz Machalikashvili's family will also be present at the scene.

Opposition and civic activists are against the construction of children's attractions for the New Year.

Representatives of the opposition parties and youth movements came to the scene to protest and again tried to put out tents once again, which resulted in a confrontation with law enforcers. Police arrested nine people in front of the Parliament last night.