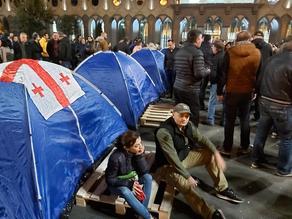 Protesters camped out in tents near Rustaveli Avenue last night. The main avenue of the capital is blocked by tents. Police also remain at the scene.

The decision to camp out in the tents on Rustaveli Avenue was made yesterday during a protest rally.

Protesters are calling for early elections in a proportional system under a transitional government.

Citizens and opposition party leaders gathered in front of the Parliament after the bill on proportional electoral system at the plenary sitting was rejected.