Rally held in front of the Ministry of Education 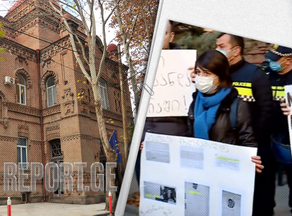 "We will never return to the Soviet Union," "Russian propaganda in Georgian history," "Glory to Beladi Bidzina" - a protest rally was held in front of the Ministry of Education accompanied by these and other banners.

The organizers and participants of the rally are protesting against the episodes related to Bidzina Ivanishvili and the Rose Revolution in the history textbook.

They are asking to remove the paragraph about Bidzina Ivanishvili from the 9th-grade history textbook.

"Bidzina Ivanishvili started thinking about an even more distant future and is trying to brainwash the new generation. Soon our children will have Bidzina's biography to study by heart," said Giga Makarashvili, a civil activist.