Rehabilitation works of building damaged in explosion to be launched

Rehabilitation works of building damaged in explosion to be launched 22 October, 2019  20:01 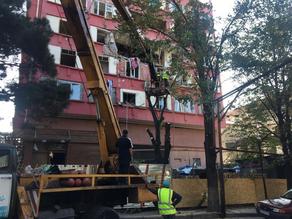 Preparatory works that will include the rehabilitation of the block of flats damaged from natural gas explosion on Guramishvili Street have been launched. As the Report.ge correspondent informs from the scene of the accident, cleaning works are already underway in the building, with the representatives of the contracting company, security police and Nadzaladevi District Government being present there. Access to the building is still being denied without rescuers.

According to preliminary information, the building can be restored so that it is appropriate for residence.

"Representatives of the company are working together with the police to keep the investigation run smoothly, " declared Public Relations Specialist of Nadzaladevi District Government Tatia Elisashvili and added that majority of families will soon be provided with the possibility to return in their flats.

On Oct 19, explosion occurred in #34 Guramishvili street residential building. The explosion was reportedly caused by gas leakage. Four floors of the building were leveled to the ground. Three victims have already left the hospital, but medical state of the fourth individual in whose flat the water heater had supposedly exploded is still extremely critical. 60% of his body was burnt during the accident.