Rescuers pull children out of the burning building - PHOTO 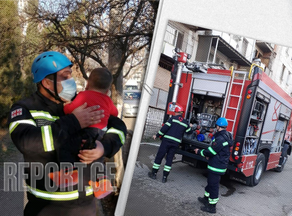 According to the agency, the fire in the residential building in Rustavi has been extinguished.

"The Public Safety Management Center 112 of the Ministry of Internal Affairs received a report that strong smoke and open fire were observed in one of the residential buildings in the 7th micro-district of Rustavi.

The Emergency Management Agency responded to the message.

According to the fire-rescue teams that arrived at the scene, residential items were burning in an area of about 10 square meters.

Firefighters evacuated the woman and her young child from a neighboring apartment for safety reasons due to heavy smoke. Their lives and health are not in danger.

No one was injured in the accident.

Three fire-rescue teams were working on the spot," the agency said in a statement.