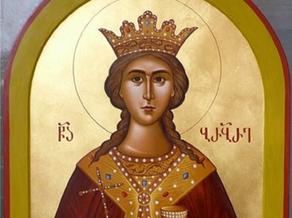 The Eastern Orthodox Church is celebrating Saint Barbara's Day today. The festive liturgy is set to be held in all churches.

Barbara's martyrdom took place at the beginning of the 4th century. She sacrificed her life for the Gospel.

Saint Barbara is considered a guardian angel of children. In their prayers, pious people ask her to cure children, to be given children, or to be protected from unexpected death.

The Great Martyr was born in the city of Heliopolis Phoenicia in the 3rd century. According to hagiographies, Barbara, the daughter of a rich pagan named Dioscorus, secretly became a Christian. Her father took her to the prefect of the province, Martinianus, who had her cruelly tortured and finally condemned to death by beheading. Her father himself carried out the death sentence.

In the Georgian pagan pantheon, the solar deity and his mother Barbale were revered and respected. As a sign of respect, sun-shaped pies were baked at the festival. After Christianity was spread in Georgia, due to the striking resemblance between the names, the solar deity's mother and Saint Barbara were associated with each other and deemed as one. Considering all this, it is not surprising that Georgians have the tradition of baking pies (the Georgian bean pie called "lobiani") on the Barbaroba holiday.