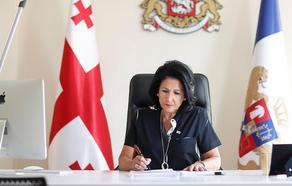 Salome Zurabishvili has offered her condolences to the Japanese whose loved ones’ lives were claimed by Typhoon Hagibis. The Georgian President has also expressed her hope that Japan will be soon restored after the cyclone.

Typhoon Hagibis has caused strong wind and heavy rain and has reportedly claimed 66 peoples’ lives. After the disaster, 92 thousand houses have been left without electricity, 120 thousand people have suffered the deficit of clean water, whereas more than 7 million left their houses, with around 50 thousand have still been living in shelters.