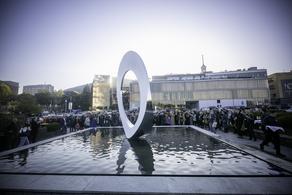 A 5-meter sculpture called N’Uovo and created by Georgian sculpture Vazha Mikaberidze, who is now living in Italy, has been opened to the public at the First Republic Square. The opening ceremony was attended by Deputy Tbilisi Mayor Sopio Khuntsaria.

The sculpture is an abstract composition, a symbol of wellbeing, productivity, and novelty. It is mobile and moves in the direction of the wind.

The amount for the sculpture has been allocated by the sculptor himself and gifted to the City Hall of Tbilisi Municipality.

Vazha Mikaberidze was born in 1967 and attended the Academy of Art in Tbilisi in 1984-1992; in 1993, he moved to Italy and pursued his studies in Florence. At present, he lives and carries out his work as sculpture in the city of Pietrasanta Italy.