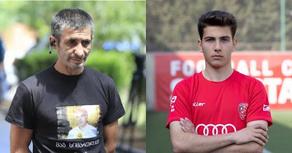 The father of the underage defendant in deceased footballer Shakarashvili's case, known as Z.Kh., says that he will soon stop consuming water. In his words, if this extreme method of hunger strike yields no result, he will take his own life.

"Our family is going on hunger strike; in three days, we will stop the consumption of water, and unless they take the corresponding steps, I will commit suicide outside the Prosecutor's Office," the minor's father declared.

Underage defendant, who is known as Z.Kh., and his father are starting a hunger strike to have their requirement of subjecting the minor and other witnesses to polygraph testing fulfilled. They also demand that prosecutor Nikoloz Sanikidze, who attended the juvenile's interrogation, recuse himself. However, the prosecutor himself says that a lie detector may not be employed in similar cases, and the judge only can render a final verdict at the court trial.

Young footballer Giorgi Shakarashvili's family notified the police of his missing on 19 June, with the police starting search and rescue operations immediately.