Shalva Natelashvili's son among those detained at Mtskheta City Hall 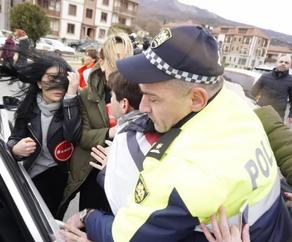 Law enforcers detained members of the Dare Movement, including Beka Natelashvili, the son of Shalva Natelashvili. There is still noise near the Mtskheta City Hall. Members of Dare Movement are demanding meeting with Dimitri Khundadze in Mtskheta. Verbal and physical confrontation took place at the site.

Initially, clashes broke out between the members of Dare Movement and the Mayor of Mtskheta, who came to meet the activists. According to him, Khundadze was not in Mtskheta and activists would not be allowed into the building.

A large number of law enforcers are still mobilized at the entrance of Mtskheta City Hall.