Six villages cut off from outside world 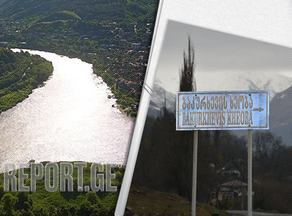 "As a result of the flooding of the Aragvi River in Dusheti Municipality, six villages got cut off from the outside world," the City Hall spreads the information.

According to the agency, the road is damaged.

"Heavy rains in Dusheti municipality have created problems for six villages of Gudamakari administrative unit Bakurkhevi. The flooding of the Aragvi River damaged the highway, cutting off the villages from the outside world. The connection with the six villages of Bakurkhevi is only possible for pedestrians.

As a result of the flooding, the power transmission lines have been damaged, and villages are not supplied with electricity," the agency said in a statement.

According to Davit Nozadze, the State Representative of Mtskheta-Mtianeti Region, the restoration works of the damaged infrastructure will start after the water level drops.

"There are two families in the villages at the moment. We have constant communication with them. They do not have any special needs," said David Nozadze.