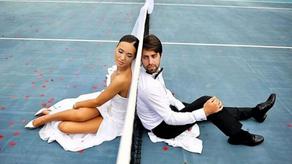 Reports saying that famous Georgian tennis star Nikoloz Basilashvili has been paying a significant amount of money to his ex-wife are baseless, according to Basilashvili's wife Neka Dorokashvili's lawyer Ana Abashidze.

"Information saying that Basilashvili paid his wife GEL 100,000 is false. This is just an amount that Neka Dorokashvili got lawfully after their mutual property was shared. Dorokashvili agreed to get much less as she did not want to enter into conflict and pursued the children's interests. She was ready to come to an agreement. A total of GEL 15,000 has so far been paid to her," Dorokashvili's lawyer said.

Basilashvili, ranked 27th in the world and first in Georgia, was charged with assaulting his wife and was apprehended before his child.

Tbilisi City Court approved the defendant's motion and released him on GEL 100,000 bail.

Nikoloz Basilashvili issued a public apology after the incident.