“Stop the elections without a choice to elect”-Act of protest 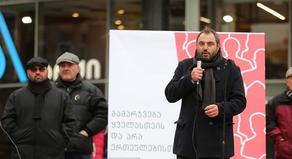 “Stop the elections without a choice to elect” – the slogan of the protest led by an independent MP Beka Natsvlishvili. “Solidarity Net” Union and Trade Unions of Tbilisi transport company “Ertoba 2013” joined the act. The protesters demand the implementation of the proportional election system. The act is planned for 15:00 at the Philharmonic Hall. According to Natsvlishvili, they demand early election in proportional system but they will not join the united opposition protest planned for Monday. According to the protesters each political party has to define what do they need the proportional system for. Whether it is just for having an MP mandate or to implement real changes. Today it became known that Beka Natsvlishvili is planning a new political movement. He states that the new political movement will protect the rights of working people. He does not exclude cooperation with other parties except the National Movement.