Tense situation near the court 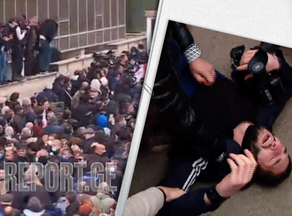 The situation has become tense at the City Court, where the trial of Georgia's third president, Mikheil Saakashvili, is set to begin.

Police and activists clashed near the courthouse where supporters of the ex-president were holding a rally.

Due to tight security measures, media representatives and protesters are not allowed to enter the courtyard today.

Despite the ban, several activists climbed the court fence and the roof of the security service booth with roses and flags.

Police forced the protesters to leave. Several of them resisted the police, which was followed by noise and controversy.

The police also used so-called pepper spray in the process.

Several activists and cameramen were injured in the incident. Ambulance teams are on the scene and providing first aid to the injured. It is unknown at this time how many of them will need to be transported to the clinic.

After the incident, activists blocked traffic. The road to the city court is blocked at the moment.