The Catholicos-Patriarch met US Ambassador - PHOTO 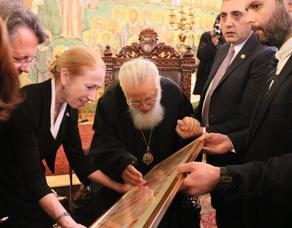 The Catholicos-Patriarch of Georgia, Ilia II, received Kelly Degnan, the newly appointed Extraordinary and Plenipotentiary Ambassador of the US to Georgia, and her companions together with the high priests and clergy.

According to the information released by the Patriarchate, the meeting focused on the friendly relations between two countries and the challenges facing Georgia.

The information released by the Patriarchate also noted that the Catholicos-Patriarch emphasized the need for the peaceful return of the occupied territories and expressed gratitude for the US support for our country.

"There are many problems, but our hope is bigger than that," the Catholicos-Patriarch of All Georgia stated.

"US Ambassador thanked His Holiness for the warm welcome and noted that the United States would continue to support Georgia actively.

Metropolitan Shio (Mujiri), the Patriarchal locum tenens, spoke about the visit of the Georgian Orthodox Church delegation to the United States last October and talked about the importance of deepening cooperation.

The Chairperson of the Department of Foreign Affairs of the Patriarchate of Georgia, Metropolitan Gerasim (Sharashenidze) of Zugdidi and Tsaishi, Metropolitan Andria (Gavazava) of Gori and Ateni, Tea Gogotishvili, the representative of the Patriarchate of Georgia in the Inter-Religious Council and Paata Gachechiladze, the Chairperson of Century 21 a non-governmental organization, addressed the Ambassador.

The Catholicos-Patriarch of All Georgia congratulated Kelly Degnan on her appointment as Ambassador and wished her success," reads the statement by Patriarchate.