The residents are let into the building for personal items- PHOTO 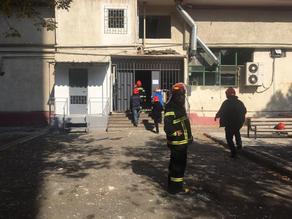 The residents of the building damaged by the explosion caused by gas leakage are let into the building for personal items.

The people are accompanied by rescuers and are let in one by one according to the list.The special services help the residents to leave the place immediately after they take the personal belonging of the first necessity.

The head of Nadzaladevi municipality told the residents that they will have to leave their houses for minimum one week until the building is studied for security and safety of its further exploitation. According to the head of the municipality all communications of the building are switched off.Irakli Kheladze says the building will be cleaned off the wreckages in a week.

Mikheil Kavelashvili, the depute of Nadzaladevi district, is also in the place.According to him a concrete company has taken the responsibility of cleaning the building:

“A concrete company will clean the building and accomplish the reconstruction works.At the moment it is essential that the 77 families evacuated from the building get temporary accommodation” – said Kavelashvili

Tbilisi City Hall representative who came to the accident place, said that the hotel search for temporary accommodation of the people was completed and the rooms were booked.

According to Tbilisi Deputy Mayor the usability of the building will be defined by the end of the day. After the laboratory test result is reported the residents will be allowed to take out their belongings from the building.

The Deputy Mayor states that the losses caused by the explosion will be compensated to the residents of the building.