Tinatin Berdzenishvili to be acting director of Public Broadcaster

Tinatin Berdzenishvili to be acting director of Public Broadcaster 18 August, 2020  16:23 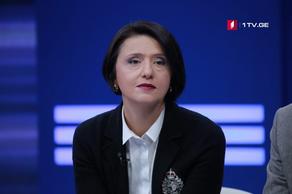 Putkaradze says that Director Maglaperidze's decision to resign was unexpected but 'reasonable.'

In her words, the contest for the selection of the new director has already been announced.

In Putkaradze's words, there have always been questions on Vasil Maglaperidze's affiliation with the Georgian Dream ruling party, and he decided to leave the post for this reason.

Tinatin Berdzenishvili says all the following procedures will continue under the law.

''No radical decisions will be made for a month and a half,'' Berdzenishvili said.