Today And Then We Danced will be protested again 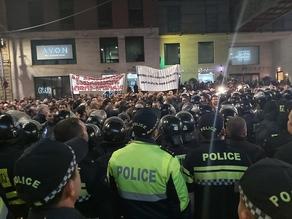 The act of protest against the And Then We Danced will continue today.

The information was provided to Report.ge by bishop Davit Isakadze. According to him it will be a peaceful protest during which they will try to explain to the people who come for the film that the film promotes sin.

According to the homophobic tempered people they are planning to gather at 18:00 close to Amirani cinema hall as they did the previous days.

The first show of the film And Then We Danced took place in five Tbilisi and Batumi cinema halls on November 8 on the background of act of the protest. The police helped people out after the film was finished.

The film created by Swedish film director of Georgian origin, Levan Akini, tells story of two folk dancer men – Merab and Irakli and their love story. The first show of the film took place in New-York on October 26 during the LGBT film festival. The love story of gay couple caused the protest among certain groups of the population.

The Patriarchy of Georgia also protests against the film demonstration based on the argument of the sin legalization.

The businessman and the Leader of Georgian March political party Levan Vasadze, threatened to debar the demonstration of the film And Then We Danced

Together with Levan Vasadze the show was threatened by Sandro Bregadze and Guram Palavandishvili - members of MDG.

Up to now the film was demonstrated only to the restricted audience. On November 8-10 the film is accessible for public in Tbilisi and Batumi cinema halls.

The first World Show of the film, in line with other 25 films, took place on May 16 in the framework of Director’s Fortnight during the 72-nd Film Festival in Cannes.

The Director of the first Georgian gay love story drama is Levan Akini who is of Georgian origin.

And Then We Danced is the film of many international rewards among which there is the award of American Film Academy during 92-nd ceremonial where it was presented by Sweden.