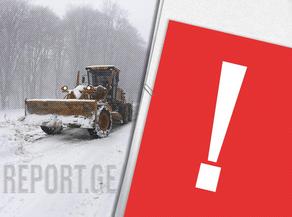 The Roads Department has issued a statement saying that snow and glaze have resulted in traffic restrictions on Georgia's some road sections.

"Trailers and semi-trailers have been banned from the Gudauri (Posta)-Kobi section of the Mtskheta-Stepantsminda-Lars highway, which is of international significance, while other modes of transport are permitted.

The movement will be carried out under the direct supervision and coordination of the patrol police," the Roads Department says.