Traffic to be banned from Gori tunnel 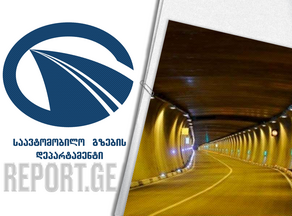 According to the Roads Department under the Ministry of Regional Development and Infrastructure of Georgia, all modes of transport will be banned from the 88th km section of the Tbilisi-Senaki-Leselidze road passing through the Gori highway tunnel. Road construction efforts are planned to be carried out on 23-34 April, with traffic to be banned from the Tbilisi-Senaki road section from 9 p.m. 23 April to 1 p.m. 24 April and from the Senaki-Tbilisi section from 1 p.m. to 5m p.m on 24 April.

In this time period, traffic will be allowed on the Senaki-Tbilisi section (when the Tbilisi-Senaki road section is unavailable) and the Gori tunnel bypass road.

The movement will be carried out under the direct supervision and coordination of the patrol police.