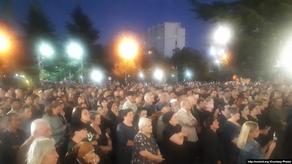 Hundreds of protesters in the occupied region of Tskhinvali are chanting "resign" and "Jagaev must be judged", Ekho Kavkaza reports.

The police cordon is in place across the entrance to a building site, with some protesters trying to start a dialogue with law enforcers. So-called deputies Davit Sanakoev and Zaza Driaev are calling upon the activists to refrain from heading to the building.

Tensions mounted in the breakaway region after inmate Inal Jabiev, charged with assaulting de-facto interior minister Igor Naniev, died in prison cell. His family alleges that he was tortured there.

De-facto president of the occupied region Anatoli Babilov told people that the interior minister was dismissed, and the investigation into the case was underway.