Turkish ambassador: Some people have aligned their sight on Georgia-Turkey relations 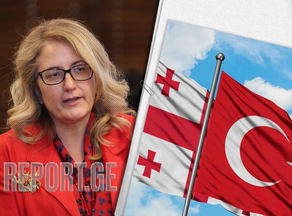 ''We are keeping an eye on the propaganda that aims to sabotage Georgia-Turkey relations. Mr. Gharibashvili's visit to Turkey shows Georgia's attitude to Turkey in the first place,'' Turkish Ambassador to Georgia Fatma Jeren Yazgan said in her exclusive interview with the Kviris Palitra paper.

In the ambassador's words, Turkey, as a NATO member country, assists Georgia in upgrading its military capabilities, and if Georgian people and government keep aspiring for integration into the Euro-Atlantic institutions, Turkey will keep providing the country with its backing.

''Georgia is Turkey's strategic partner regardless of whether or not it will join NATO.

In his speech on the six-country platform, President Erdogan said that ''the key is in Georgia,'' but, in his words, if Armenia, Georgia, and Azerbaijan create a trilateral format, Turkey stands prepared to support the initiative.

Turkey and Georgia are important actors in the region, and our positions coincide. However, those who have aligned their sight on Georgia-Turkey relations as a target, try to interpret this otherwise,'' the ambassador stated.

Fatma Jeren Yazgan also focused on the Karabakh war, saying that Turkey has not taken sides back then.

In the ambassador's words, Turkey respects the territorial integrity and sovereignty of both Azerbaijan and Georgia.

''I have already mentioned that some people have aligned their sight on Georgia-Turkey relations employing hybrid technologies in doing so. The same threat is posed to Georgia-Azerbaijan relations,'' Fatma Jeren Yazgan stated.