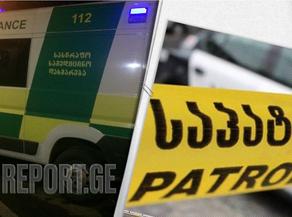 The driver of a vehicle and a passenger reportedly died after the driver lost control of his car and veered off the road in the Lagvanta village, Oni municipality.

One out of the three passengers in the car died on the spot, while the driver passed after hospitalization. The third passenger is now in hospital.

The investigation of the case has been launched under Part 6 of Article 276 of the Criminal Code of Georgia, envisaging the violation of traffic laws and road safety, resulting in death.