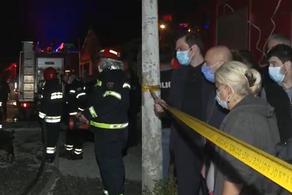 Two houses have been burned after a fire erupted in Batumi Dream Town.

Several fire brigades were at the scene.

Ajara Government Head Tornike Rizhvadze was also at the scene.

Mr. Rizhvadze said that families affected by the blaze have been transported to a safe place.

In his words, the fire has claimed no victims.