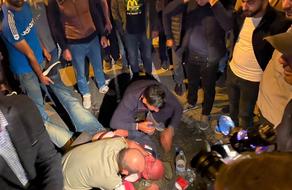 An altercation among the members of the opposing parties also occurred during the day, with its cause being the election of the district commission members.