US Embassy: Endurance and self-sacrifice are no strangers to Georgians

US Embassy: Endurance and self-sacrifice are no strangers to Georgians 9 April, 2020  12:28 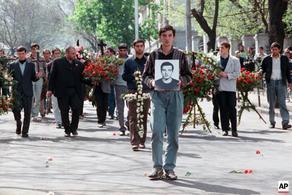 The Embassy of the United States of America in Georgia released information regarding April 9.

"Endurance and self-sacrifice are no stranger to the Georgian people. On the 31st anniversary of Day of National Unity, we commemorate 21 innocent people who lost their lives on the streets of Tbilisi and the hundreds of injured who stood by them. We will honor the memory of those who failed to witness the freedom and independence for which they fought so hard," the embassy said in a statement.

On the morning of April 9, 1989, Soviet troops dispersed a peaceful protest in front of the Parliament building in central Tbilisi, killing 21 people and poisoning thousands of civilians with unidentified gas.