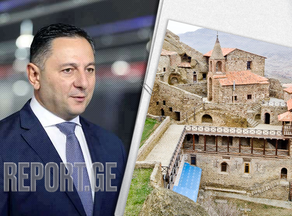 "All forms of violence are unacceptable," the Minister of Internal Affairs said in response to yesterday's incident at Davit Gareji.

"I cannot tell you about the re-qualification of the investigation into the incident that took place at Davit Gareji yesterday because the prosecutor's office should discuss the changes.

We started the investigation. I can only say that all forms of violence are unacceptable. Of course, first of all, towards journalists and citizens.

The investigation will determine who will be punished according to the law," Vakhtang Gomelauri said.

Gomelauri did not rule out that other articles will be added to the investigation.

"I am not an investigator but the Minister of Internal Affairs; I was told that they had started an investigation, they will see the footage, they will observe," Gomelauri said at the Republican Hospital, where he got vaccinated.

The Ministry of Internal Affairs has launched an investigation under Article 126 of the Criminal Code of Georgia, which stipulates violence in the case of the attack on the film crew of the Mtavari Channel and Iveri Melashvili.