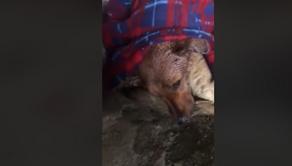 A wounded dog has been found in one of the villages of Lagodekhi, according to the Animal Protection Organization. The canine had reportedly sustained a gunshot wound to the head.

The dog has been saved; however, the definite amount is necessary for its treatment, Georgia's Integration Development Foundation reports. The Organization calls on citizens to donate some money.

"This canine has been found in one of the villages of Lagodekhi. The dog was extremely sick, and we took it to Tbilisi, where it underwent an X-ray examination. We learned that the dog had sustained a gunshot wound. Around two weeks ago, it was operated; the dog survived, but we have to pay 150 GEL now, which we do not have. If we fail to pay it in four days, they will have to abandon the canine in the street. Please, help us with at least one lari so that we do not leave this poor creature in the street," the statement reads.