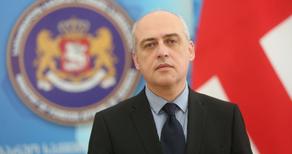 The Foreign Minister of Georgia spoke to Vazha Gaprindashvili's wife on the phone from Berlin. Davit Zalkaliani wrote about it on his social media page.

“I spoke to Vazha Gaprindashvili's wife on the phone from Berlin. I wanted to personally inform her about the actions and steps taken by the state to release Vazha. First of all, I want to thank his family for their patience and endurance.

My work day begins with this issue and at all the high-level meetings that I have held these days, and the one that is planned, the main topic is Vazha.

I told Tamila the position of the German side and our partners in general. They condemn what has happened and promise us to use all possible means to solve the problem immediately", reads the statement.

Ketevan Tsikhelashvili, the State Minister for Reconciliation and Civic Equality of Georgia said that she had received information through several sources that Vazha Gaprindashvili, will be released soon.

The US Embassy in Georgia demands immediate release of the detained doctor.